THANK YOU to the citizens of Springfield, IL for their kindness and hospitality and especially to the Staab Family without whom this project would never have existed. Custom Wagons built the Wagon Wheels for the Abraham Lincoln Hearse and was one of the build teams of Combat Veterans for the reconstruction of the Abraham Lincoln Hearse and the celebration of the 150th Anniversary of his burial in Springfield’s Oak Ridge Cemetery.

Thank you not only to the City Of Springfield, but all the Downtown Merchants and Siciliano, Inc. for the Billboard banner that was placed thanking the build team of Combat Veterans.


The problem was that the original hearse had been retired after it was used for the Abraham Lincoln funeral. The hearse itself was stored on the second floor of Lynch & Arnot livery company, where it was destroyed in a massive Feb. 9, 1887, fire that killed three people and about 200 horses. 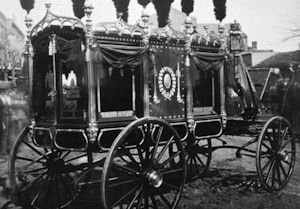 The above photo was the only picture that survived history of the original Abraham Lincoln Hearse. There are a number of people to thank besides the three teams that worked on the reconstruction of the new hearse. Two are David Spencer and Justin L. Fowler of The State Journal-Register who took most of the pictures you see here. David’s and Justin's interpretation of the celebration of the 150th Anniversary and the photos of the new Abraham Lincoln Hearse are absolute spot on.

REENACTORS WITH THE ABRAHAM LINCOLN HEARSE

In case you are not aware, reenactors take their roles very seriously. Dealing with cannons I have had some contact with reenactors, however, I was not aware of how serious they were until Springfield. Not only do they spend a lot of money to make sure their costumes are period correct, the same is true for everything.

RECONSTRUCTION OF THE ABRAHAM LINCOLN HEARSE